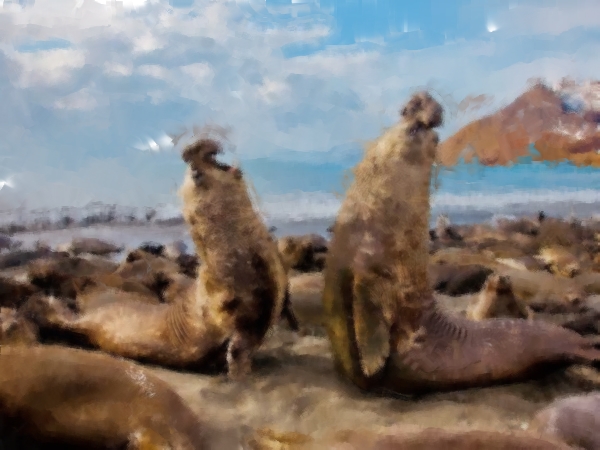 The first thing I thought of when I read today’s EO Tax Journal (by the irrepressible Paul Streckfus) was two bull elephant seals fighting over turf. Growls, howls and the musky scent of combat hormones in the air. In one corner, the top Exempt Organizations guru, Bruce Hopkins, touting his new book, Ultra Vires: Why the IRS Lacks Jurisdiction and Authority to Regulate Nonprofit Governance. In the other, Marv Friedlander, outspoken former IRS Chief, EO Technical, shouting at Streckfus’ readers that Hopkins was wrong.

So having two bull seals going at it, over questions on the 990 is … weirdly normal in our world.

But this one is deeper. Not the wording or the meaning of the 990 questions, but whether the IRS can ask them at all. Was the IRS “ultra vires,” or beyond its legal authority?

The questions (on P. 6, Part VI, Section B of the 990) are simple enough: does the organization have a conflict of interest policy? A whistleblower policy? Written document retention policy? A compensation reasonableness review process (presumably consistent with the IRS’s procedures to avoid taxable “excess benefit transactions” under IRC § 4958)? All good sound management policies. And therein lies the rub.

Marv Friedlander, in an all-too-rare display of candor for an IRS EO official, ‘fesses up that he was the “initial instigator behind the governance” questions. He says: “In bowling, if the form is right, the pins should drop. In exempt organizations, if procedures for safeguarding an organization are in place … the likelihood of compliance with tax law is increased.” In other words, the ends justify the means.

Hopkins (disclosure: I was co-counsel with Hopkins in some fairly-significant legal matters in the distant past) respectfully disagrees, in long form. His book demonstrates that the IRS “has a lengthy record of getting the underlying law wrong and imposing detrimental policies and practices on” tax-exempt organizations.

Friedlander actually agrees with some of this history; in today’s letter to EO Tax Journal, he relates an instance where he had to correct one of his IRS agents. The agent had repeatedly blasted an applicant for exemption with questions and demands for changes in the organization’s organizing documents — and then denied the application.

To his credit, “I personally apologized to the organization,” Friedlander writes, noting that he eventually granted the exemption application. Bet that made the applicant feel all warm and fuzzy after spending time and money trying to comply with the agent’s repeated questions and demands.

Hopkins, however, goes on, in matters not addressed by Friedlander, that this is “federal mission creep” (my term, not Hopkins’) by the IRS. State law addresses nonprofit organizations; states have long been dominant in areas of corporate (or entity) regulation. Federal law addresses federal tax exemption. The new 990 questions are all in the area previously exclusively state-law governed. Exploring the nature of agency law, Supreme Court decisions such as the hotly-debated Chevron doctrine, and the development of the IRS’s imposition of governance and operational standards, Hopkins shows that the IRS has no authority to impose such rules on EOs.

The IRS admits, in the Form 990 heading for Part VI, Section B itself, that “This Section B requests information not required by the Internal Revenue Code.” The 990 instructions (on page 18) do say: “Whether a particular policy, procedure or practice should be adopted by an organization depends on the organization’s size, type and culture.” But the real effect — costs and time — will fall on those trying to do the right thing. Those who want to break the rules will likely do so anyway.

Friedlander says that this language demonstrates that the IRS governance questions are not prohibited commands, but only “good governance advice because states, outside watchdog groups, Senate and House committees, news media, and interested individuals also have roles in ensuring that governing boards properly assume their fiduciary responsibilities.” He cites to complaints about the United Way, televangelists, Synanon, and other organizations whose managements went seriously awry.

But the 990 instructions also say “Although federal law does not mandate particular  management structures, operational policies, or administrative practices, every organization is required to answer each question in Part VI. For example, all organizations must answer lines 11a and 11b, which ask about the organization’s process, if any, it uses to review Form 990, even though the governing body isn’t required by federal tax law to review Form 990.”

Pretty mandatory. We are going to make you say PUBLICLY whether you are using the IRS-mandated whistleblower policies, even though we can’t compell you to do so. We’ll leave that to other people. Just because we think it’s a good idea to have others criticize you, to keep you in line. In other words, regulating by fear?

And that’s not all. There is the new threat that the IRS will clamp down on organizations that are not using procedures and policies which aren’t “required by federal tax law.” Not subtle. And in operation today, since the IRS has started using “data-driven” selection for examinations from the 990 filings, which they openly admit includes the answers to these “not required by federal tax law” questions on the 990.

But all this “advice” costs a lot of money and time, especially for small organizations. It costs thousands of dollars a year for an organization to hire compensation specialists and lawyers to satisfy the ‘whistleblower’ and other requirements. That’s a policy choice, not a tax compliance issue. It is Congress and the states which should impose these requirements, as Hopkins clearly demonstrates in his new book.

And as another top practitioner just pointed out to me, “It’s not as if the IRS needs to go out and look for more things to do.”

Nor should it, since the mentality behind the “we can do this, so we will” push for the IRS to step beyond its jurisdiction and authority can justify ANYTHING in the name of avoiding violations of the law. The IRS is famous for nebulous “advice” and even more ambiguous “facts and circumstances” rules of law. Certainty is lacking in the vast majority of exempt organization law, where “facts and circumstances” justify traps for the unwary. Or even the wary.

So if the IRS wants to advise organizations on good management practices, let it do more of what it has been doing: explain things on its website, hold outreach sessions, and do all the things that other regulatory agencies do to help compliance.

But, of course, those normal and common steps would require the IRS to recognize that it imposes burdens, and it must justify those burdens by the benefits derived from them. And THAT is the real danger here: the IRS thinks all organizations are bad and must be restrained because a few, and only a few, have run amok. But THAT decision is the province of Congress and the states, not the IRS.

One thought on “Bull elephants fighting over the 990”