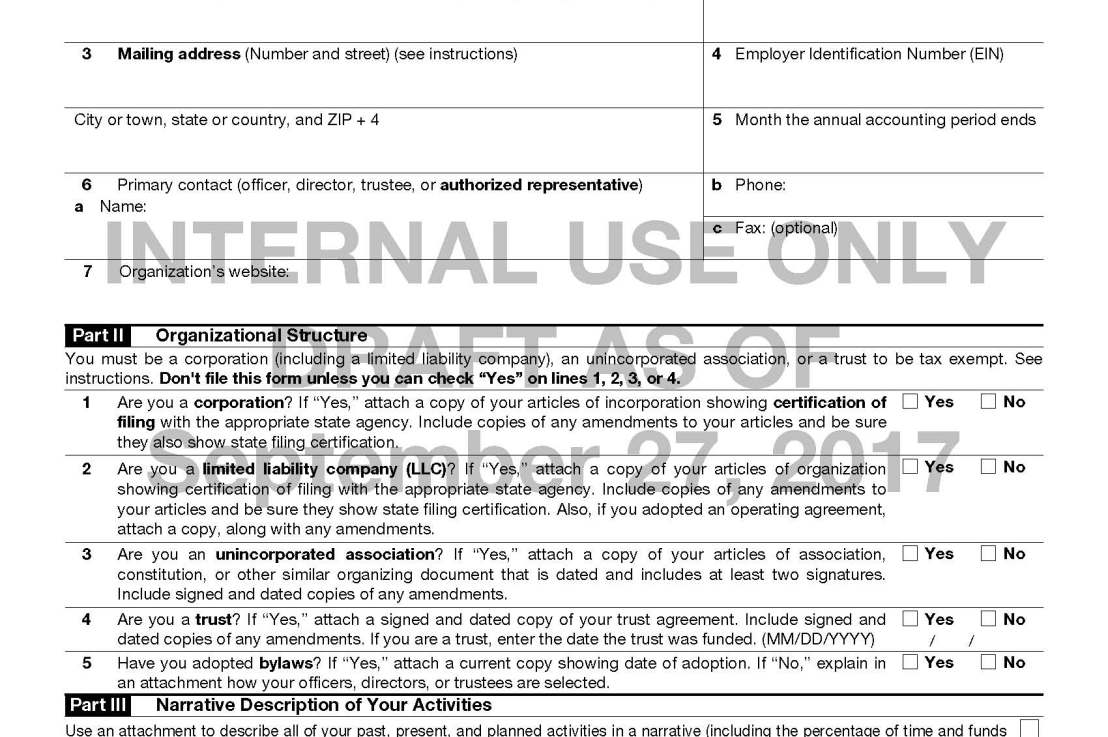 Susan Leahy of Covington & Burling, in Washington, D.C., has obtained a copy of the IRS draft Form 1024-A, and confirmed that it is cleared for her to distribute it. Many thanks to Susan, an accomplished member of the First Tuesday Lunch Group and its ancient predecessor the Lunch Bunch, for overturning this rock.

Confusion abounds about this new form. It’s all the result of a misguided and poorly-drafted amendment to the Internal Revenue Code in 2015. Some background:

Social welfare advocacy groups, exempt from most federal taxation under IRC § 501(c)(4), have never had to file applications for exemption with the IRS; they receive “recognition” of their exemption by virtue of their non-profit organization under state law. That’s why the IRS Form 1024, which can be used by those organizations that want the IRS to recognize their status, is entitled an application for “recognition”. A new c4 could simply file its annual tax information returns – Form 990 – and go about its merry way (though the IRS would send it a letter saying, in essence, “we don’t see you in our files; please file a Form 1024”).

But the PATH Act of 2015 mixed things up. A quite convoluted and ill-drafted section created new IRC § 506, which doesn’t require a new 501(c)(4) to apply for exemption, but DOES require them to file a notice with the IRS that they intend to operate as a c4. An existing c4 that hasn’t filed Form 990s (and yes, they are out there), would have to file one of these notices to keep its c4 status. And that filing had to have been before June 2016. Fellow FTLG member Sally Wagenmaker, of Wagenmaker & Oberly in Chicago, had a nice post explaining all this. The notification is by filing IRS 8976.

The notification is expressly not a substitute for a Form 1024; a c4 can file a Form 8976 and not a Form 1024 and be fine. 501(c)(4) status does not require any positive action by the IRS other than an acknowledgement that a Form 8976 has been filed, if required. (Of course, many c4s file 1024s to satisfy donors who want to see something from the IRS that the organization is exempt.)

In other words, Form 1024 is still optional for a c4. But the Form 1024 does not say it’s optional, nor does it reference the IRC § 506 requirement that a c4 file a Form 8976 or a 990. And it does contain a lot of material that is irrelevant to 501(c)(4) status. In other words, this situation is a perfect storm of confusion and waste, almost guaranteed to cause problems.

In a similar situation, involving the requirement to file a 990 at least every three years, the IRS threw tremendous resources into contacting every tiny or obscure organization that might have been affected. There’s a special, user-friendly reinstatement process for organizations that just didn’t get the word.

Not so for the new Section 506. There was a lot in the tax press about it — or, at least some pieces like Sally’s. And the IRS did issue interim guidance in Notice 2016-09 explaining the situation, but not any reinstatement or assistance process.

Enter the Form 1024-A. A single sentence on P. 241 of the Joint Committee on Taxation’s report on the  PATH Act mentions that “It is intended that such a request for a determination be submitted on a new form (separate from Form 1024, which may continue to be used by certain other organizations) that clearly states that filing such a request is optional.” There is no explanation for why this new section is needed; no description of a problem or benefit. Just a flat new requirement. Apparently an attempt to bridge the divide between those who believe c4s are inherently evil (“dark money” because they don’t have to disclose their donors) and those who think they provide a useful means for Americans to exercise their First Amendment-protected freedom to associate. But we just don’t know. And the new Form is not helpful.

All we have so far is the draft Form, and not the instructions, which usually explain a lot. The purpose of the form, as suggested by the JCT report, is to provide an optional application form for c4s. The draft says right at the top (though in small letters): “A request for a determination under section 501(c)(4) is optional.”

And it does reference Section 506 and the Form 8976. Part VIII of the draft, on Page 4 right above the signature line, says:

Part VIII
Information Regarding Notification Requirement Under Section 506
Most organizations operating under section 501(c)(4) are required to notify the IRS that they are operating under section 501(c)(4) within 60 days of formation by filing Form 8976, Notice of Intent to Operate Under Section 501(c)(4). If an organization doesn’t submit a timely notification, a penalty will be assessed. Submission of Form 1024-A doesn’t satisfy the requirement to provide notice to the IRS. See instructions for additional information regarding the notification requirement.

But a lot of the material on the draft Form 1024-A is still burdensome, and is pretty much cut-and-pasted from the original Form 1024. Arguably most of the questions have to do with things that will make the IRS’s life easier by providing information about possibly troubling situations, like Excess Benefit Transactions with “substantial influence persons” prohibited under IRC § 4958.

But is there any reason why this form has to be any more complicated than the new 1023-EZ, with essentially self-certification? Is this intended to be only the 1024 plus some brief mentions of the Section 506 requirement and the optional nature of the Form? That would be bare compliance with the JCT report’s single sentence requesting an optional form, but it wouldn’t really reflect the burden involved (something some of us mentioned during consideration of the PATH Act).

So we’re going to have more confusion about c4 applications for recognition, lots of questions that need to be answered on the form, but not for any clear purpose, and more work for we few struggling tax-exempt organization lawyers who have to explain why yet another layer of useless regulation is layered on protected speech. “Yes, you have the right to associate and speak, but we’re going to fine you $20 a day for the privilege unless you give us this Form and possibly others.”

[Update: The IRS published a notice soliciting comments in the August 24, 2017, Federal Register, asking in particular for:

Comments are invited on:
(a) Whether the collection of information is necessary for the proper performance of the functions of the agency, including whether the information shall have practical utility;

(b) the accuracy of the agency’s estimate of the burden of the collection of
information;

(c) ways to enhance the quality, utility, and clarity of the information to be collected;

(e) estimates of capital or start-up costs and costs of operation, maintenance, and purchase of services to provide information.